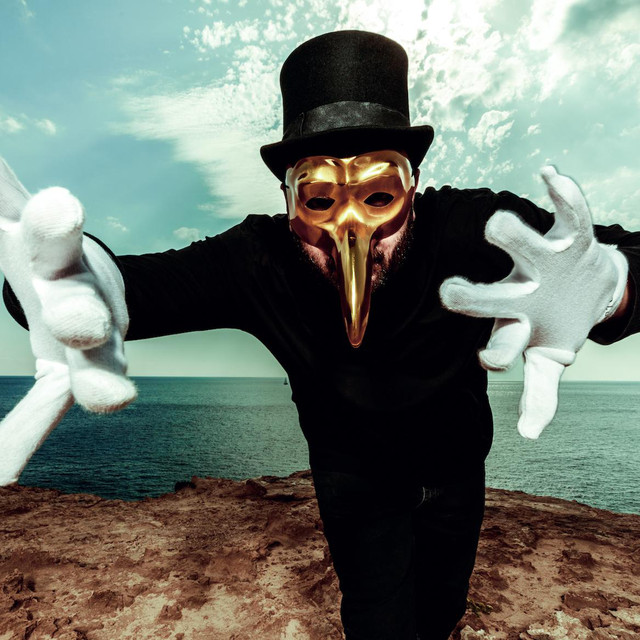 In a now long forgotten world, many generations ago, a bird like shape emerged from wooded darkness, floating and fluttering, drifting and dreaming. Backlit by a bright glow of iridescent light, the undecipherable form wore a dazzling golden mask. Its long beak swooped down like an inverted horn and since then, people have referred to the mythical being simply as Claptone.

Years spending wandering medieval landscapes have informed Claptone’s view of the world, experiencing both magical mystery and muted melancholy he enchanted onlookers with occult instruments and beguiling sounds. Forever surrounded by a sense of intrigue, the world soon cottoned on to the elusive yet enchanting musical powers of this otherworldly beast. The results are that today his shamanistic sonic powers take him all around the world.

By now we all know that 2012AD proved to be a year dominated by Claptone’s infectious ‘Cream’ track. It became an immediate hit, topping new world charts at Beatport and RA. In 2013 his shamanistic sonic powers really took him everywhere - the mystical figure played 200 shows in 130 cities on 6 different continents. Hot productions to bleed from this shadowy one’s lair include ‘No Eyes’ and ‘Wrong’ which both topped Beatport charts, got played by everyone, were ubiquitous across Ibiza all summer and also picked up plenty of Radio 1 plays from Pete Tong and Annie Mac. But that’s not all, because remixes of the Pet Shop Boys, The Magician and George Morel’s classic house tune ‘Let’s Groove’ also managed to capture audiences under their spell.

Claptone has been mentioned in our news coverage

Here are the latest Claptone mixes uploaded to Soundcloud.

Do you promote/manage Claptone? Login to our free Promotion Centre to update these details.