Warning: Use of undefined constant USER_ID - assumed 'USER_ID' (this will throw an Error in a future version of PHP) in /home/vhosts/skiddle.com/httpdocs/artists/artistheader.php on line 29
 FACTORY tickets and 2020 tour dates
» Events » Events by artist » FACTORY 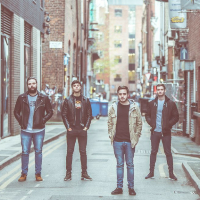 Hailed as “Merseyside’s most promising act”- Scruff of the Neck records, FACTORY have been shaking up venues all over the country supporting bands like SPACE, as well as selling out headline gigs in Manchester and Liverpool. In 2016 FACTORY were chosen by Alan McGee to open up for Primal Scream at Victoria Warehouse in Manchester.

2017 has been FACTORYs most successful to date, kicking off with the sold out release of single and music video for 'Step a Little Closer', receiving radio play from Dave Monks at BBC Radio Merseyside and winning single of the year at Klee Music. FACTORY also completed their first UK tour, with dates at Sound City, TRAMLINES, Dot 2 Dot and even their first gig in the capital.

2018 promises to be as big as their ambition, so "keep an eye on this band, they're gonna be big" - Flick of the Finger Magazine.

FACTORY has been mentioned in our news coverage

Caribou announces 2020 album - how to find tour dates and tickets

Here are the latest FACTORY mixes uploaded to Soundcloud.