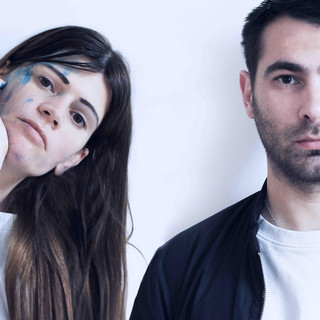 Over the past two years, Factory Floor have emerged as the most potent and original live force in contemporary British music. Based in their own studio in a former sweat shop in North London, the trio of Gabe Gurnsey, Dominic Butler and Nik Void construct a new form that builds on the pioneering rhythms and sonic textures of early industrial groups, the heavier end of techno, and contemporary electronica. Just as they were becoming infamous as a group who delivered pulverising noise in an all-engulfing assault that menaced the bands they were supporting, Factory Floor evolved yet again.

Despite an increasing lightness of approach, their music has lost none of the relentless energy and focussed aggression. ‘Lying’, their first release on Blast First, was voted one of NME’s best albums of 2010, and a subsequent 12” series saw remixes from New Order’s Steven Morris and Chris Carter of Throbbing Gristle and Carter Tutti. This was followed by the R E A L L O V E single on the Optimo label. As Factory Floor move ever onwards in practice and methods as much as sound, they plan to compliment traditional single and album releases with one-off performances, films, art installations and collaborations. The first of these came when Chris Carter joined Factory Floor for their performances at Barcelona’s Primavera Sound Festival and the London Roundhouse. Formed around three, an indestructible triangle, Factory Floor's human machine is the very sound of progress

Factory Floor has been mentioned in our news coverage

Twisted Wheel interview: 'You make your own rules up, I like that'

Atari Teenage Riot confirm London date at Under The Bridge

Factory Floor announced to play The White Hotel in Salford

Here are the latest Factory Floor mixes uploaded to Soundcloud.

Do you promote/manage Factory Floor? Login to our free Promotion Centre to update these details.