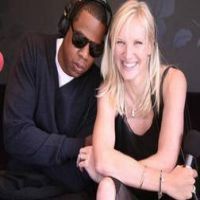 Jo Whiley is a British radio disc jockey on BBC Radio 1 born in Northampton, England on the 4 July 1965. She went to Campion School (Bugbrooke) and then university in Brighton. Blonde and often wearing Dr. Martens, she broadcasts from 10 a.m. until 12.45 p.m. every weekday. She enjoys live music and has bands and solo artists playing live in the studio frequently. From September 1993 until February 1997 (the heydays of Britpop - Blur and Pulp), she hosted a weekday evening show called The Evening Session with Steve Lamacq from 7 until 9 p.

Jo Whiley has been mentioned in our news coverage

The Maccabees, Noah and the Whale and Richard Hawley for Little Noise Sessions

Do you promote/manage Jo Whiley? Login to our free Promotion Centre to update these details.