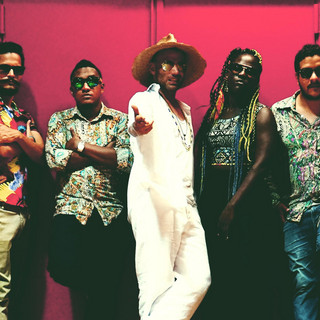 La Mambanegra (The Black Mamba) is a powerfull latin music orchestra. Its venom is made of 70s NYC Salsa and elements of Jamaican and Colombian music, Funk and Hip Hop music.

Inspired by the story of an anonymous and mythical heroe of the Barrio Obrero, a popular neighborhood of Cali, who had a series of fantastic advendtures in his hometown, La Habana and New York, this orchestra brings a new concept of Salsa and Latin Music to the world.

Highlighted as one of the 5 Colombian bands you need to know by Billboard, La Mambanegra played in Colombia along with big acts such as Bomba Estéreo, ChocQuibTown, Pedrina y Rio or Monsieur Périné and just received great reviews of their first album El Callegüeso y su Malamaña (Self produced in Latam, European launch: March 2017, Movimientos records) selected as one of the 10 albums of the year by the #1 weekly newspaper in Colombia – Semana – along with various other medias.

La Mambanegra hasn't been mentioned in our news coverage

Below is a sample playlists for La Mambanegra taken from spotify.

Do you promote/manage La Mambanegra? Login to our free Promotion Centre to update these details.