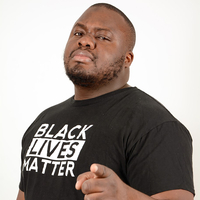 The Deco Theatre in Northampton

The Core Theatre in Solihull

Nabil competed in the 2020 series of Britain’s Got Talent, enjoying a triumphant run to the competition’s final, drawing praise from the show’s judges for his hilarious and uncompromising brand of stand-up comedy. Awarding Nabil the coveted ‘Golden Buzzer’ in the first round of the competition, Alesha Dixon praised his “edgy, charismatic” style while David Walliams described both his performance and writing as “perfect”. In a piece suggesting Nabil should have won the competition overall, the Sunday Telegraph described Nabil’s performance in the final as “urgent, uncompromising and refreshingly radical fare, smartly woven into a gag-packed set.”

Nabil has made several media appearances as a comedian and social commentator on ITV, BBC2, BBC3, BBC Asian Network, Channel 4, Al Jazeera English, Islam Channel and British Muslim TV. He has also toured across Europe, Africa and the Middle East.

Joint winner of the Which Religion Is Funniest? competition, judged by UK comedy legends Omid Djalili and David Baddiel. Triumphing over a number of more experienced comedians in the final of the latter, Nabil won the opportunity to perform at London’s prestigious Hammersmith Apollo, becoming the youngest ever black stand-up to do so

Nabil Abdulrashid hasn't been mentioned in our news coverage

Do you promote/manage Nabil Abdulrashid? Login to our free Promotion Centre to update these details.