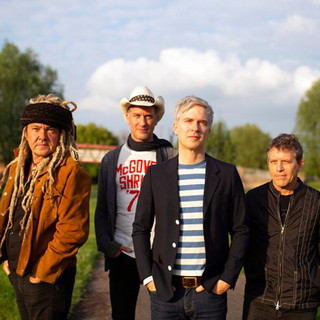 Nada Surf is an American alternative rock group formed in 1992. The New York band consists of Matthew Caws (guitar, vocals), Ira Elliot (drums, vocals) and Daniel Lorca (bass, vocals). The band is best known for the song "Popular" from their 1996 album High/Low. The song reached #11 on the US Billboard Modern Rock Tracks chart and propelled the album to #63 on the Billboard 200. Each of the verses in "Popular" are extracted from the 1964 guide "Penny's Guide to Teen-Age Charm and Popularity" by former teen television actress Gloria Winters - and is sarcastically spoken - initially in a calm, deadpan voice that gradually builds Kinison-style in teen angst and rage. The follow-up effort, The Proximity Effect, failed to garner much attention. The band explains on their official website: Nada Surf recorded The Proximity Effect in 1998 with Fred Maher (Luna, Lou Reed, Matthew Sweet). It was a mighty fine record. Elektra [now part of Atlantic], claiming they "didnâ€™t hear a single," asked the band to go back in the studio to hunt for one. As this was months after theyâ€™d handed the record in, the band refused and were dropped. Itâ€™s pretty safe to say, though, that Elektra didnâ€™t appear to be "listening" very hard. The Proximity Effect was released as scheduled in Europe. Critics loved it and fans bought it. Elektra still didnâ€™t care, but the band still did. So after wrestling the rights back, Nada Surf released The Proximity Effect stateside in 2000 on their own label, MarDev Records, and toured accordingly... After a three-year wait, the group released Let Go through Barsuk Records to positive reviews. The song "Inside of Love" received some airplay and even reached #73 in the United Kingdom, a feat which neither "Popular" nor the other two previously released singles from Let Go achieved. On the strength of the single, the album reached #31 on Billboard's Top Independent Albums chart. The band's fourth album, The Weight Is a Gift, was released in Germany on September 5, 2005, by City Slang Records, in Japan/Australia September 12th and in the US September 13th by Barsuk, and in the rest of Europe September 19th by V2/City Slang. It was produced by Chris Walla of the band Death Cab for Cutie, Louie Lino and Nada Surf. The album's lead single is "Always Love." In 2008, Lucky was released. In 2010 the band returned to the scene triumphantly with the cover-album If I Had a Hi-Fi, revealing a diversity in source material whilst re-moulding it into trademark Nada Surf songs. The band announced a new record will be released in January, 2012 called " The Stars Are Indifferent to Astronomy." The first single is called "When I was Young" and is available free to download from the band's website. On Oct 24th, 2011, the song was also featured as an NPR "Song of the Day" User-contributed text is available under the Creative Commons By-SA License and may also be available under the GNU FDL.

Nada Surf hasn't been mentioned in our news coverage

Below is a sample playlists for Nada Surf taken from spotify.

Do you promote/manage Nada Surf? Login to our free Promotion Centre to update these details.