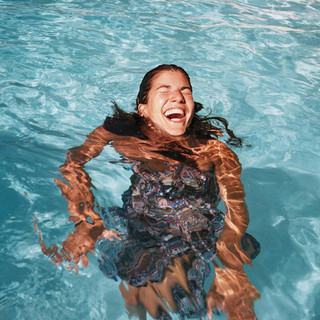 Nadia Ksaiba is highly regarded for her well honed DJing skills, radio show Rhythm Connection on the ascendant Dalston station NTS and production work as G&S. Music has been in her life since she traded violin for guitar and some drums as a child, graduating through punky teen bands, producing primitive forms of dance music with the help of an Atari ST home computer and working in record shops from the age of fourteen. Take all this in and you start to see how the picture has developed for Nadia, first as a DJ taking in a residency at Our Disco with the like minded Rory Phillips. Running for five years and featuring an array of high profile guests, the hugely popular Our Disco gave Ksaiba the platform to DJ further afield, including tours with Simian Mobile Disco and festivals such as Bestival, the Bugged Out Weekender and Stopmakingsense.

The urge to make music has remained with her throughout this period and it first manifested itself in the G&S project Ksaiba shares with Matt Waites. Together the pair have released a smattering of underground hits, notably on Andy Blake’s seminal and much missed Dissident label, a contribution to In Flagranti’s 'Electric Fling' series, as well as an early gem on Disco Bloodbath's own label.

The future however brings the next stage in Nadia’s creative development, joining the ranks of Daniel Avery, Connan Mockasin and Babe, Terror with a release on Phantasy, and it’s a step that might surprise a few people. The soon to drop record for Erol Alkan’s flourishing label sees Ksaiba step forward as a singer and song writer. Hearing Nadia’s cooing vocals over the rasping synth infused house of “Virtual Lover” will stop many people in their tracks, but for a music obsessive such as Nadia it’s the next logical step. It’s a track that has Ksaiba and Waites fusing the dancefloor dynamic of Midnight Star, with the pop of those life-affirming early Madonna singles, "Virtual Lover" offers an intriguing insight into the forthcoming debut album Ksaiba is currently working.

Nadia Ksaiba has been mentioned in our news coverage

The Month Ahead: Techno in London for November

Justin Robertson: I try not to look back and live off past glories

Below is a sample playlists for Nadia Ksaiba taken from spotify.

Do you promote/manage Nadia Ksaiba? Login to our free Promotion Centre to update these details.