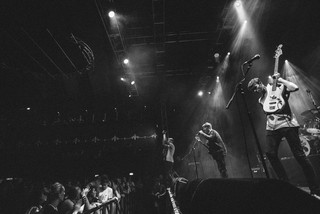 Formed in 2015 in a small ex-mining village in Barnsley, Paisley Sundae are 4 young lads full of ambition and unique music. Singer and guitarist Mason Harris, bassist Henry Swift and drummer Owen Galloway went through school together and guitarist and synth player Josh Whitehurst joined in March of 2017 after a line up change. They supported Razorlight in August 2017 to a sold out o2 Indigo in London after getting through to the last 8 of a 3000 band competition hosted by Radio X and Greene King. Inspired by acts such as Peace, Nirvana, The Prodigy, The Smiths and The Libertines, their music has been described as indie with a heavy twist. Their first single ‘Had Someone’ is currently at 140,000 listens on Spotify and that’s rising everyday. Their chemistry and on-stage presence, coupled with their idiosyncrasy, has made them a must watch for 2018 and you’ll be seeing them everywhere.

Paisley Sundae hasn't been mentioned in our news coverage

Here are the latest Paisley Sundae mixes uploaded to Soundcloud.