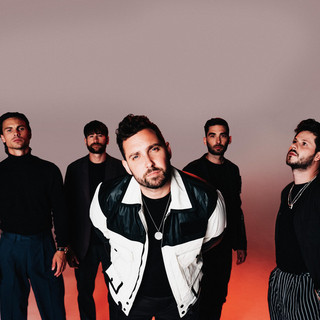 You Me At Six tickets and 2021 tour dates

British rock band You Me at Six made their album debut in 2007 and rose to Top Five success in 2010 with their second effort. Founded in 2004 in Weybridge, Surrey, the band comprises Josh Franceschi (vocals), Max Helyer (guitar), Chris Miller (guitar), Matt Barnes (bass), and Dan Flint (drums). They made their recording debut in 2006 with We Know What It Means to Be Alone, a four-track EP that was followed by another, Untitled 4 Track EP.

Take Off Your ColoursYou Me at Six made their full-length debut one year later with Take Off Your Colours on Slam Dunk Records in the United Kingdom and Epitaph Records in the United States. Produced by Matty O'Grady and John Mitchell, Take Off Your Colours reached number 25 on the U.K. albums chart and spawned the hit singles "Save It for the Bedroom," "Finders Keepers," and "Kiss and Tell." Thanks in part to heavy touring, including a performance at the 2007 Slam Dunk Festival, the band's popularity grew steadily and earned them a nomination for Best British Band at the 2008 and 2009 Kerrang! Awards. Working once again with producers O'Grady and Mitchell, You Me at Six released their second album, Hold Me Down, in 2010. Featuring the singles "Underdog" and "Liquid Confidence," Hold Me Down reached the Top Five of the U.K. albums chart.

The following year, the band relocated to L.A. to work on their third release, Sinners Never Sleep, with producer Garth Richardson (Biffy Clyro, Rage Against the Machine). The record saw them move in a heavier direction and featured throaty vocals from Bring Me the Horizon frontman Oli Sykes and Parkway Drive's Winson McCall. The album arrived in late 2011 and peaked at number three in the U.K. album chart. After the success of Sinners Never Sleep, they recorded a new song for English theme park Thorpe Park's new ride, The Swarm, and released it as a digital single in 2012. The final date of their nationwide tour that year -- at a sold-out Wembley Arena -- was recorded and released as a live CD/DVD set in 2013.

You Me At Six News

You Me At Six has been mentioned in our news coverage

You Me At Six at Victoria Warehouse in Manchester review

You Me at Six "VI" album review

More You Me At Six news »

You Me At Six playlist

Below is a sample playlists for You Me At Six taken from spotify.

You Me At Six videos

Do you promote/manage You Me At Six? Login to our free Promotion Centre to update these details.