Coronavirus update: View cancelled events here
» News and Features » Days out with Skiddle: The best experiences and attractions in the UK

Days Out With Skiddle is back and we have a whole host of events here that will tempt you to buy a ticket. From boxing to comedy and theatre.

We're back with even more amazing lifestyle events that are on Skiddle this week. If you fancy the theatre then you'll be spoilt for choice with this one but we have so much more from boxing to comedy and some delightful food and drink. Click on the event titles to learn more about them and get yourself booked on.

This is going to be one of the biggest nights at the AO Arena this year as a bunch of famous people are going to be punching each other for our entertainment. All of the celebrities have been training rigorously in preparation as they don't want to be going out in the first round. Hosted by Chris Kamara and Michael Buffer, this is going to be a memorable night.

Where: The Garrick Theatre, London

This theatre production features the iconic queen of soul Beverley Knight takes the lead role in a brand new musical. It follows the story of The Drifters, one of the world's greatest vocal groups and the woman who made them. Following the highs and lows, personal tragedies and hit songs it is a roller coaster ride through a remarkable story that you cannot miss.

Aladdin is a classic tale and a beloved Disney movie that is still watched by children today. So come and join genie and friends at this pantomime performance that takes place on Boxing day. With a lyrical twist on each character, there will be live music, magic lamps and plenty of laughs to be had. Maybe your festive wishes will come true.

Russell Kane has been making entire rooms burt into hysterics for years now. He's recently gained even more acclaim through his Evil Genius podcast that has been featured on BBC Sounds. He's appeared on a whole host of shows from The Apprentice You're Fired to The One Show and Live at the Apollo. If you follow his social media you can even get a glimpse into his 'Kaneing' material.

Come down to Astley Park to enjoy an iconic and unforgettable opera experience. Follow a group of struggling friends as they try to navigate the various highs and lows that life throws at them. Bringing the opera to an unusual location, prepare to be dazzled by this performance from the middle of the park.

It won't be too long now until Halloween fever grips us once again and what better way to celebrate spooky season than to watch a scary movie. Even better you can watch it on a huge screen at Filton Airfield where you can drive-in and they promise that they'll be going that extra mile to bring the film to life so keep your eyes peeled.

Coventry Cathedral has been transformed into a place for eating drinking and conversation. Feel free to bring some friends and family down for some fine street food. Open until late, you can enjoy sitting amongst this picturesque setting. With staggered arrival times and plenty of spacing the dining club feels incedibly safe and you can enjoy a friendly atmosphere throughout. 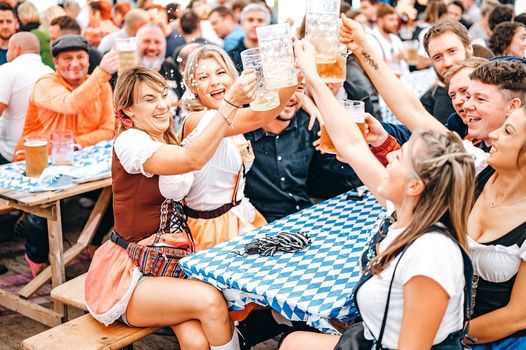 Where: The Hangar, Wolverhampton

There surely isn't a better excuse to have a laugh than when Oktoberfest comes around each year. So get that lederhosen and get a few steins down you in this celebration of alcohol and good times. It should probably come with a few days off work afterwards. At The Hangar in Wolverhampton, you'll be entertained by oompah bands, DJs and other entertainers.

Come down to Entry Bar in Liverpool for this special screening of two of Monty Python's most iconic movies, The Life of Brian and The Holy Grail. They will even have some specially themed cocktails being made up for the event. These are two of the funniest movies ever made in British cinema, expect to be laughing quite loudly.

Heathers is currently enjoying a 12-week residency at Theatre Royal Haymarket and luckily you can still catch some shows. Follow Veronica Sawyer at Westerberg High as she joins the Heathers and may finally achieve popularity but has she gotten in way over her head?