As the festival gears up to go back to its roots and set up camp in the city centre, we've selected five of our favourites from the Liverpool Sound City line up

What is now a staple in the festival diary, Liverpool Sound City has grown steadily over the years, to become one of the most revered music festivals in the country. Small and humble, yet not averse to pulling world famous acts to headline, the festival welcomes talent both established and emerging.

For 2018, after spending time down on the docks in recent years, it returns to its roots and sets up camp in the Baltic Triangle, having started out as a metropolitan, multi venue event 11 years ago. The line up reflects this, with a strong focus on fresh new sounds from across the genres. We picked out a few faves who we'll be sure to see when we head over to Merseyside on Saturday 5th  and Sunday 6th May.

A Skiddle favourite, Australia's DMA's are set to close the Saturday of this year's Sound City. The indie rockers release their forthcoming and much awaited second album For Now on April 27th, just in time to christen it live in Liverpool. Watch the new acoustic video for 'In The Air' above for a more stripped back version than what we usually expect from the band.

A clear influence in their music from Madchester bands and British guitar music, the trio have built up a loyal following in the north west and we advise getting there early for this set. To get familiar with the lads, have a read of our recent DMA's interview.

With backing from the likes of Brian Jonestown Massacre's Anton Newcombe, Alex plays Sound City following the release of his new album, which was put out on Newcombe's label late last year.

The evolution of his sound owes as much to Springsteen as it does to the Gallaghers and Dylan, having transgressed the constraints of indie-folk a few years back, to his recent offering, 'Alex', which is steeped in echoes of Americana. With a following that includes Liam Gallagher, Bonehead and even The Dandy Warhols, Alex is one act we won't be missing at Sound City this year.

If you're into your lo-fi you'll be in to Yellow Days. Think soulful, surf rock inspired beats with hazy guitars and a dash of electronica here and there and you're on the right tracks.

In interviews he has stated he's influenced by artists like Howlin' Wolf, Mac Demarco and Tame Impala, all of which slots into place when listening to tracks like the recently released The Way Things Change. The perfect antidote to a hectic day at Sound City.

The Manchester band are making serious waves in their home city at the moment are a seriously hot prospect. The funky foursome recently sold out The Academy 2 in their home city, a huge landmark for a band so young, but it's not hard to see why they're making such a big impression.

The funk is well and truly strong with this group, who through the locked in groove of drums, guitar and bass, produce infectious indie bangers of the highest order. Impossibly catchy melodies and just a general feeling of fun is why you have to check this band out.

The Birmingham four piece's eagerly anticipated new record is their first in three years and the early signs are extremely positive with three of the album's tracks, 'Under Liquid Glass', 'Power' and 'You Don’t Walk Away From Love' a great indication of that Peace have tapped into the same vein of groovy anthems that they have delivered on their past two album. With an already electrifying live set bolstered by new sounds, the weekend's closing slot is set to be very enjoyable indeed. 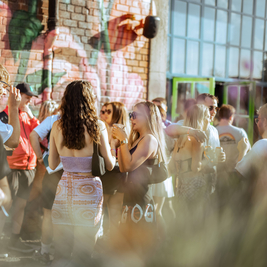 Liverpool's multi-genre, multi-venue festival is back for 2023 with its biggest line up yet, coverin...

Liverpool's multi-genre, multi-venue festival is back for 2023 with its biggest line up yet, coverin...