Lightning Seeds and Get Cape. Wear Cape. Fly will join the legendary '90s band, playing an exclusive gig for fans in Lancashire in the run-up to this year's long-awaited Highest Point Festival

The determined and hard-working crew behind one of Northern England's most sought-after open-air festivals, Highest Point have recently added an extra night of fantastic live music to this September's return event.

The additional evening of entertainment will see an impressive lineup of music greats performing to thousands of fans upon the stunning 54-acre grounds of Williamson Park, on Thursday 2nd September. Providing attendees with a special headline performance, legendary '90s band James will head up the bill of the newly announced show, with support coming from Liverpool's Lightning Seeds, and solo musician Get Cape. Wear Cape. Fly. 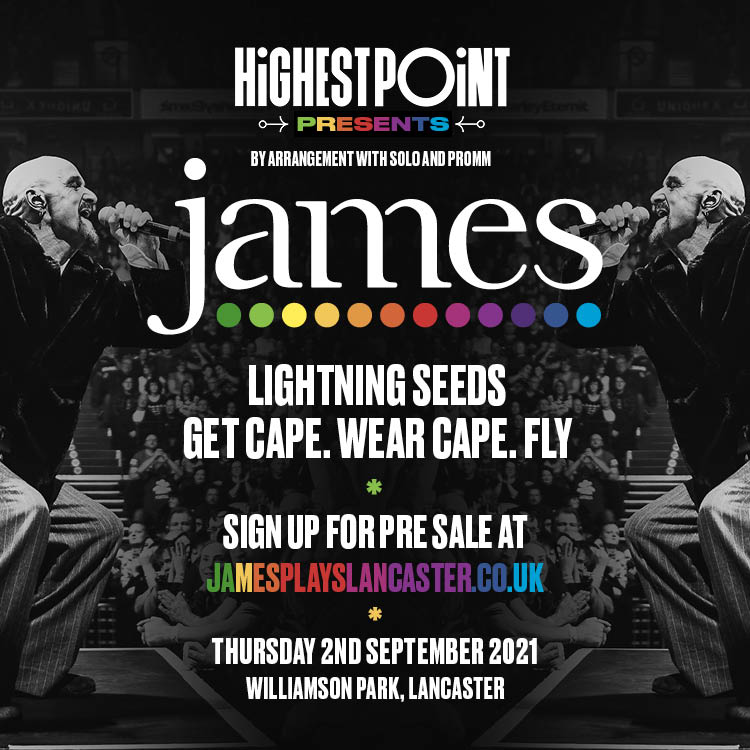 Taking to the stage to play classics from their extensive back catalogue, festival favourites James will also perform some of their most recently released material, including brand new single ‘Beautiful Beaches’, taken from their latest studio album All The Colours Of You - set for release on Friday 4th June.

Following the huge success of the bands breakthrough single, 'Sit Down' in 1991, James have continued to write, record and release, issuing a total of fifteen studio albums, selling over 25 million copies in the process. The group continues to perform countless headline shows and festivals across the world, with a UK arena tour scheduled to go ahead this winter.

Lighting up the main support slot on the upcoming evening event, chart-breaking Liverpudlian rock band, Lightning Seeds are set to perform the many tracks which brought the band mainstream fame throughout their illustrious career - from 'Life of Riley' to 'Pure', 'Lucky You' and more.

Get Cape. Wear Cape. Fly, aka English musician Sam Duckworth, will also delight gig-goers, joining the two bands at the gig, on what will be the fifteen-year anniversary of the release of his debut album - The Chronicles Of A Bohemian Teenager.

Listen to 'Once More With Feeling' from The Chronicles Of A Bohemian Teenager below...

Highest Point Festival, which was originally set to take place in May 2020 but postponed to the ongoing pandemic, will now run over three amazing days this autumn - from Thursday 2nd to Saturday 4th September 2021 - boasting a bigger capacity than ever before and a spectacular new stage.

The full line up for this year's comeback edition was announced earlier this month and features stand-out headline displays from artists the likes of Rag’N’Bone Man, Rudimental, Clean Bandit, Becky Hill, Hybrid Minds and The Futureheads to name a select few.

Set to welcome up to twenty-five thousand ticket holders over one fun-filled weekend, guests of the festival can expect to see more than one hundred artists performing live across six epic stages, with a premier regional street food and craft beer offering also on-site, for when you need to stop and refuel.

Check out the full festival line up below...

Pre-sale tickets for the newly added event are priced at £35 and will be available to purchase from 9 am on Thursday 29th April. Sign up for pre-sale at www.jamesplayslancaster.co.uk. General tickets will go on sale via Skiddle at 9 am on Friday 30th April.

Final release tickets for Highest Point Festival are still available, with tickets for Friday at £45, and tickets for Saturday costing £55. Secure yours now - here