A trusted go-to destination for music lovers’ searching for their next favourite act, Liverpool's Sound City is primed to make its long-overdue return in October this year.

Regularly boasting a rich and diverse lineup of 'ones to watch', the independent UK festival has become a pillar of essential new music discovery, renowned for hosting and breaking some of the biggest and freshest musical acts since it's first instalment over a decade ago.

Now scheduled to take place over the first weekend in October 2021 - from Friday 1st - Sunday 3rd October 2021 - the festival will welcome an unrivalled bill of names, all destined to be the soundtrack of the months to come, leading into a huge 2022.

Those lucky enough to secure entrance to this highly sought after event can expect to see some incredible, world class performances from a wealth of both established and emerging names - the likes of rapper Rejjie Snow, The Murder Capital, The Snuts, indie newcomers The Lathums, Lanterns On The Lake and Abbie Ozard, alongside bursting new local talents Red Rum Club and The Mysterines, and some new international faces, such as Miss Tati, Hello Delaware, Isabel Neib and Brooke Combe. 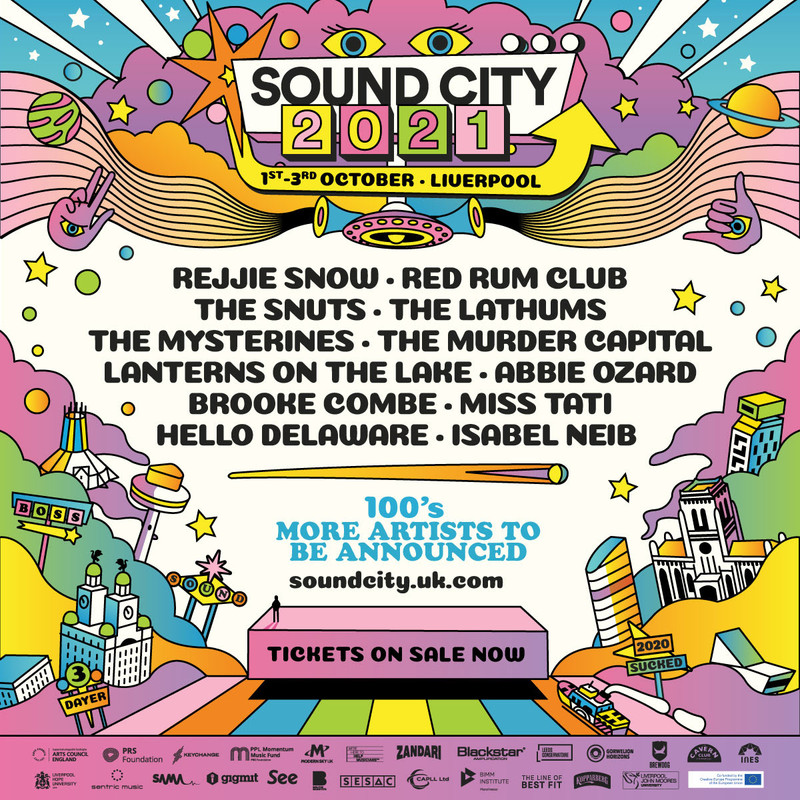 And that's just a taste of what is to be expected from Sound City this year. The festivals organisers have more up their sleeve, with a third headliner set to be announced in the coming months alongside a feast of the best in new music.

“I can’t believe that it’s been nearly two years since the last time we came together at Sound City, and that anticipation to get back to showcasing the best in new music has never been greater. Enjoying amazing new artists in incredible venues is what makes Sound City great, and we’re excited to bring together genre-pushing favourites, thrilling live bands and must-see moments this October.

"With many more names to be announced, including a special third headliner, finally welcoming everyone back to Sound City is going to be a very special moment. We can’t wait."

Ever committed to championing gender equality across all of their global musical projects - from Sound City Korea, Ipswich and latest streaming platform Guesthouse - Sound City has also confirmed the festival will be continuing its long-standing relationship with partner - Keychange, a global movement focused on the restructuring of the music industry to achieve gender equality.

Leading a vast array of festivals and events across the UK and beyond, the focus remains on achieving equal representation for women and gender minorities - a focus that will be shown across the full Sound City lineup with many more names to be revealed in the months ahead and through a range of initiatives, panels and more.

Celebrate the undeniable spirit of incredible live music and the soundtrack of the future with thousands of other passionate music fans in the UK's bubbling music capital.

Tickets are now on sale, with all previously purchased tickets being valid for these new dates.

New on Skiddle: Gigs and festivals you can buy tickets for right now

The best music festivals in Scotland