Check out this weeks roundup of the latest and greatest events, now on sale with Skiddle

We're not exactly sure whether it was the flash of summer we all experienced earlier in the week, or the welcomed return of the rule of six, following the most recent easing of COVID restrictions on Monday 29th March, but somethings definitely got UK party planners and promoters fired up...

Another HUGE influx of excellent events have gone live on Skiddle over the past seven days. From brand-new rave events in the warehouses of the English capital, and dance music spectacles on the stunning Liverpool waterfront, to lavish international beer celebrations and much, much more...

One thing's for sure, there's a great deal of entertainment to get involved with in the coming weeks and months. Check out some of the many fantastic, newly added events below, and grab yourself some tickets before it's too late.

Click or tap on the event titles below for tickets and more...

Where: Liverpool Pier Head in Liverpool

Scouse DJ and producer duo, CamelPhat have confirmed they will appear live under the watch of the majestic Liver Building, on Liverpool's picturesque Pier Head this September.

Presented by globe dominating dance brands Cream and Circus, also both based in Liverpool, the event will see the Grammy-nominated pair performing tracks from 2020's critically acclaimed album Dark Matter, on their biggest homecoming show to date.

The all-day party will form part of a long weekend of shows ‘On the Waterfront’, and is set to be Liverpool's biggest event in over year.

More performing artists have yet to be announced for the event. watch this space.

Find tickets for Camelphat on the Waterfront here

Where: Royal Highland Centre in Edinburgh

Running a full outdoor event on the site of the expansive venue, those who acquire tickets should be filled with excitement, in anticipation of catching exemplary live sets from DJs such as Floorplan, Mella Dee, Cinthie, Elliot Adamson, Ewan McVicar, the main man himself Patrick Topping and very special guest, Reinier Zonneveld.

Tickets for this 10+ hour rave are in high demand and have almost all sold out. Act fast and get yours now.

Where: Code in Sheffield

Without a doubt one of the most exciting electronic artists in the world right now, the Queen of minimal techno, Amelie Lens is set to bring the house down at Sheffields Code Warehouse, this July.

Taking the Northern city by storm, the Belgian mixmaster and club destroyer will fly in to make, what will surely be, her unforgettable debut with seasoned Sheffield party throwers - Muzik Events.

Tickets for are expected to sell out extremely fast. You'll need to be quick off the mark for this one.

Where: The Drumsheds in London

Assuming control of one the city's most prestige live music venues and celebrated rave spaces - The Drumsheds, HARD London will host a carefully curated lineup of some of the most respected and current, dance music dons.

Set to appear at the debut event, punters can expect to see live music from the likes of Holy Goof, Alesso, Tchami, Jauz, Dillion Francis, Malaa and many more...

Where: E1 London in London

Originally postponed, the new rescheduled date, which will take place at one of London's most exciting new venues -  E1, will see a number of the imprints roster artists taking turns on the decks, performing bangers throughout the daytime event.

Only a limited number of tickets remain, secure yours now below... 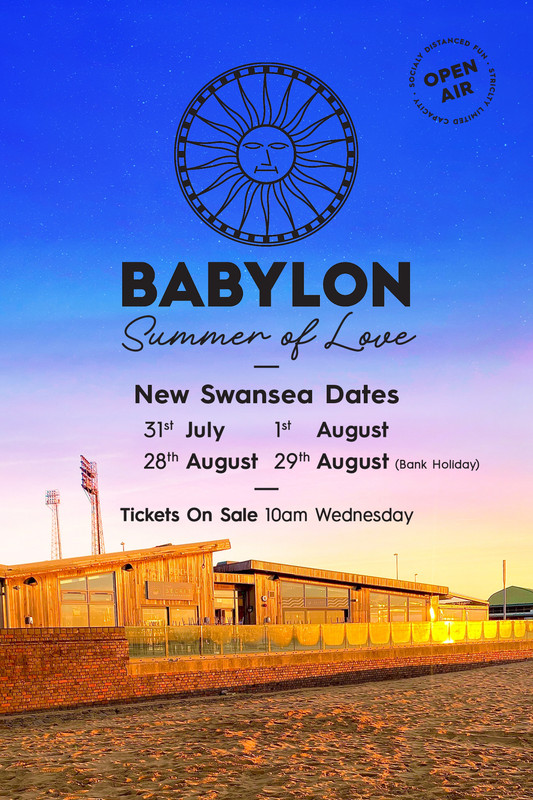 Where: The Secret Beach Bar And Kitchen in Swansea

Where: Globe Waterside in Leeds

Returning to Leeds this August, The Garden Party 2021 will set up shop at a brand new, city-centre location - the Globe Waterside.

Running from Saturday 7th to Sunday 8th August, the two-day event promises to make up for lost time in 2020 by throwing its biggest party to date, featuring a colossal lineup, yet to be announced.

Pre-sale tickets for this huge summer event have already sold out! Watch this space for more details...

Where: O2 Academy in Leicester

The brands first party since lockdown began at the start of the year, 9 Years of Beastwang will boast a lineup rammed with huge headliners, rising stars and skilful MCs, the first of whom to be announced include drum n bass maestro, Andy C and wordsmith, Tonn Piper.

Where: Hidden in Manchester

In partnership with Teletech and Lo Fi, one of Manchester's favourite night spots, Hidden plans to kick off its Autumn re-opening this September, with a host of performances from some distinguished dance music names.

Performing throughout the 9 hour event - running from 5PM until 4AM - club revellers can dance until the sun comes up to the sounds of Omar S, Anetha, Blawan, DVS1, LSDXOXO, Aletha & Nicki Chong.

Tickets are almost all sold out for this one, with just a few day and night only tickets left. Get yours now.

Where: Printworks London in London

Making his highly-anticipated return to London in 2021, UK chart-topper Dimension will takeover one of the city's most impressive night clubs - Printworks London, delivering a mind-blowing immersive experience like no other.

Don't miss your chance to see one of the UK's most unique electronic acts live in London this year.

Where: O2 Victoria Warehouse in Manchester

Taking place at the city's cavernous O2 Victoria Warehouse, the big birthday bash will see a horde of much-loved names entertaining thousands of partygoers. Amongst the many coveted artists confirmed to make an appearance are the likes of Grammy-nominated, trance pioneer, Paul Van Dyk, John Askew, making his world exclusive debut, John O'Callaghan and more...

Tickets for this event are in extremely high demand. Don't hesitate.

Where: Gorilla in Manchester

An all-new monthly event series is coming to Manchester venue, Gorilla this summer...

Focusing purely on and around the music, Paralax will showcase some of the worlds most respected techno names, as well providing a platform for new and emerging talents, an on always undisclosed programme of performers. Intriguing.

Geared towards the serious, dance music loving contingent, Paralax events boast a 'no frills or pretentiousness' code of conduct. Featuring minimal production, a strict no phone policy and a first rate sound system - it's just you, and techno. Bliss.

The dedicated team behind one of Northern England's best loved vintage events, Crafty Vintage have announced they will take up residence at one of Lancashire's most recognisable landmarks, Hoghton Tower, for a series of excellent live events this year.

Running throughout the summer, those based in and around Lancashire can watch live music performances from the likes '90s favourites Crazy P, as well as live theatre shows, including productions of Peter Pan, Cinderella and more.

In addition to the spectacular live entertainment, those in attendance will also find a series of stalls set up by local independent businesses, selling a vast array of trinkets, treasures and and delicious treats, all lovingly crafted and presented.

Where: Beacon Park in Lichfield

Dust off your lederhosen and grab your most prized stein...

Promising the best Oktoberfest outside of Munich, the 3rd Lichfield Oktoberfest is set to bring all the flavours and traditions of the globally celebrated, German beer and food festival, to the West Midlands this October.

Expect the very best and strongest German ales, the tastiest Bavarian cuisine and the finest Oompah bands found anywhere in the UK, at this mega three-day event.

Looking for a Socially Distanced event to attend in the upcoming weeks and months? Check out our long list of COVID safe parties happening near you throughout the spring and summer here