Now is as good a time as any to focus on the brilliant venues that we have across the UK. With Square One popping up in Manchester, we thought we'd get to know a bit more about it.

Exciting times! A new venue is opening up in the heart of Manchester just in time for restrictions being lifted across the country. So long have we waited to get back to dancing again and Square One looks like the ideal place to let your hair down this year. It's being run by promoters based in Manchester who have built up a reputation for amazing shows in unique locations across the city.

We spoke to Olli Ryder, co-founder of Square One, who filled us in on what Square One can offer to Manchester and the amazing events that they have coming up at the venue.

It's been a nightmare for the events industry for over a year now, they were the first to close at the start of the pandemic and they are the last to be freed from restrictions. Yet people have still been determined to make things happen, whether that be socially distanced or postponing until the time is right. Square One has had to face this already with their events early in July being put back to August. It's a more difficult time than ever to be sorting out live events.

You've had a few setbacks with the pandemic, why is now the right time to launch this venue?

Olli: "Who hasn't! It's the game we play in the current climate, you always learn lessons and come back stronger. Now is the moment as it's what the people deserve".

What was it that inspired you to open Square One?

Olli: "During the trying times of the last 18 months, we wanted to create something new for people to come and experience. The dancefloors have been sadly missed and it's our duty as promoter's to ensure these experiences remain. It's going to be such a spectacular summer once things open up, and we can't wait to share that energy with everyone again".

In terms of the actual venue space, Square One scoured the land and settled on a car park next to Mancunian Way and a stone's throw from Piccadilly Station. It may not sound like your standard venue space but they wanted to pick an underground spot that may otherwise have been overlooked. After all, it's the places you may not expect that can turn out to be some of the best spots going.

How would you describe what people can expect from your venue space?

Olli: "The location is amazing, Manchester is the city that keeps on giving. The environment, alongside the production and onsite creative, is going to feel fresh as daisies".

What about the old car park made you believe that it was the perfect space for a venue?

Olli: "The off-key party locations are what it's all about. It pays homage to the early rave days of pitch up and party. You can't beat a knees up in a car park in the middle of the city centre".

What can people expect from a typical night out as Square One?

Olli: "A wicked space with top sound, a chance to listen to your fav DJs in a bespoke creative environment. All the ingredients of a good time!" 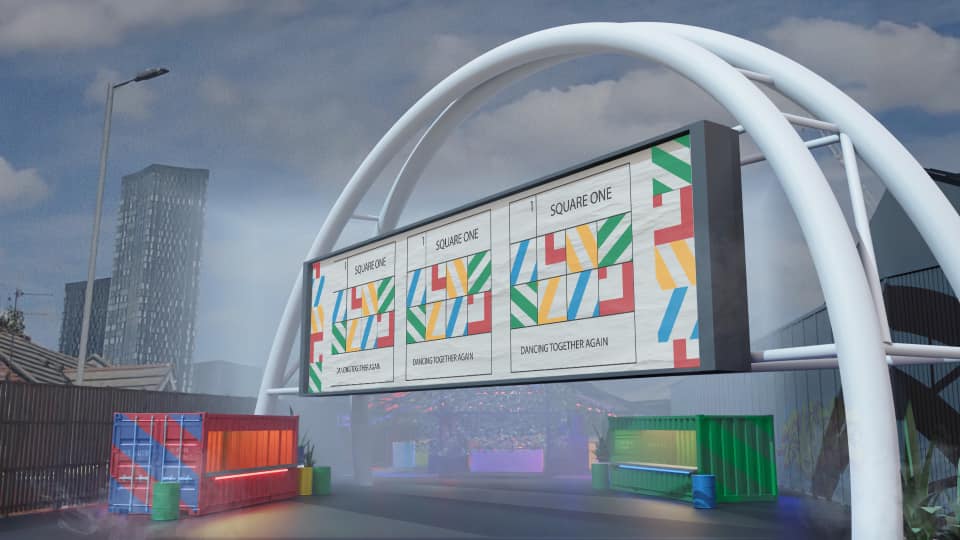 Square One is continuing Manchester's proud history of rave culture and this venue is the latest chapter within that. They started out as a group of friends brought together by music and partying culture, which naturally led to organising events with an emphasis on a great time to be had by everyone, never taking themselves too seriously. It's an attitude that has helped them to excel in the city that they call home and help to shape the clubbing scene for years to come.

What kind of impact do you want Square One to have on Manchester?

Olli: "The opening of events is on the tip of everyone's tongue, not just in Manchester but across the globe. All I can say is we're ready and raring to go, and excited to be contributing towards these initial moments back".

Do you think Square One will help to make the Manchester clubbing scene even stronger?

Olli: "I think we can help contribute in our own way, as with every promoter who stays committed to pioneering and putting on shows. Manchester is wicked man, I'm super excited to see how the new landscape evolves in the post-pandemic world that is fast approaching".

Square One's lineup of events this summer is absolutely massive. They're working with promoters such as Jika Jika and Zutekh to bring you DJs from all over, including Denis Sulta, Hot Since 82, Luigi Madonna, Mella Dee and more. They're all massive movers from the realms of house, techno, acid house and everything else in between.

You have quite a few events coming up on Skiddle, which ones are you personally looking forward to the most?

Olli: "That's like asking who's the favourite child! To be fair, we're super happy with the programming, from Denis Sulta, Hot Since 82, a debut PIV showcase. It's a great selection of high-profile artists. For me, it's got to be the boy Enzo Siragusa who'll be going all day long!"

Are there any hidden gems on any of the lineups that you think people shouldn't overlook?

Olli: "The Hector Oaks show is one to watch, he's setting the tone in the technosphere."

What are you looking forward to most about the return to clubbing that should be happening in July?

Olli: "You meet your best mates and your Mrs to be in the dance. The connection and interaction with people, it's something I've missed dearly. Putting the right people, in the right place listening to the music they love. TALK TO ME!!!"

Square One in Manchester will be opening this July. The first event will be the PIV debut showcase on July 24th, you can find tickets here:

Fancy more events that are going on in Manchester? Then head over to our What's On Guide. For festivals make sure you check out our Festival Finder Tool.

The Best Clubs in Manchester