Arguably the most prolific and highly-sought after techno DJ Scotland has to offer - Frazi.er has been making massive moves in the worldwide techno scene! Finally, he makes his hugely anticipated Dundee debut!!

Many of you know Frazi.er from his massive Open-to-Close sets, which sell-out in minutes! As a Terminal V mainstay, Nightvision resident, and head honcho of Concept Festival, Frazi.er consistently produces some of the most raw, energetic and exciting sets on the planet!

Frazi.er has been doing absolute bits over his career - with releases on massive labels like Amelie Lens’ Exhale, Odd Recordings, Sleaze Records, and the mighty Second State Audio. Frazi.er has also been garnering attention from some of the biggest names in the scene like Carl Cox, Amelie Lens, Pan-Pot, Charlotte De Witte, and tons more!! Having most recently sold out the Hydro in Glasgow alongside the legendary Nina Kraviz, Frazi.er has solidified himself as a MASSIVE talent with so much more still to come!

Support on the night is from oor biys Jallen & RMZY.

ONLINE TICKETS FOR THIS EVENT WILL GET SNAPPED UP FAST, WE WILL HAVE VERY LIMITED TICKETS ON THE DOOR.

Tickets can be purchased from Skiddle and on the door -

Some of our fav puss melters from the man - 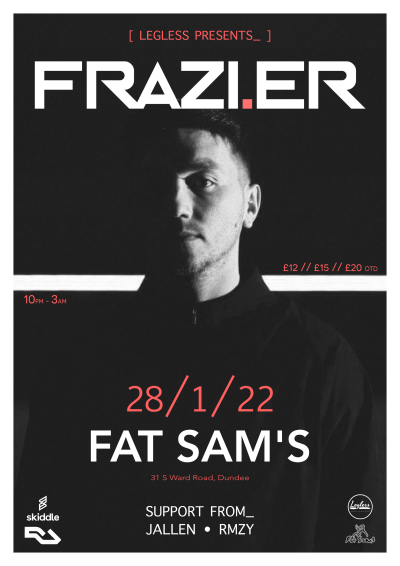 Need a place to stay? Compare every available hotel deal and Airbnb near Fat Sam's, so book today to secure the best price!.

Jordan said: "After meeting a tik tok legend and my pals mrs going ape s**t not to mention I didn’t even see the DJ at his best but I lost my wallet started smoki". More »

Skiddle has been trading since 2001.

Tickets via email or app.