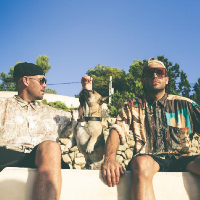 Skiddle is an official ticket outlet of Inside Out 2022. Get Inside Out Festival tickets, news and information with Skiddle.com

Widely considered as modern-day kings of the underground, Mancunian duo Solardo (James Eliot & Mark Richards, aka MRK1) continue to blitz all before them, amassing widespread plaudits for their role as not just hugely popular DJs, but also label owners, and innovative forward-thinking producers.

With the prolific duo’s meteoric rise a true testament to their hard work in the studio and infectious energy in the club, a slew of early releases via imprints such as Viva, and elrow helped rocket the pair to their first Beatport Number #1 with their breakthrough record on Hot Creations, ‘Tribesmen’. Since then, the pair have catapulted into the public eye with their recent hit ‘Be Somebody’, remixing tracks for the likes of Duke Dumont & Gorgon City, MK, Nicole Moudaber & Carl Cox, David Guetta & Black Coffee, whilst also contributing to Pete Tong’s career-defining Essential Mix series on BBC Radio 1.

The festival headliners later released EPs on Toolroom Records, Lee Foss’ Repopulate Mars and Green Velvet’s Relief Records, Solardo soon branched out into their now iconic Sola imprint which soon became a home for some of the most predominant tech-house tracks on the circuit. The label celebrated 50 releases towards the end of 2018 with tracks from the likes of Secondcity, Mason Maynard, and Grammy nominated duo Camelphat - who Mark & James recently worked with on collaborative club track ‘Accelerator’.

Solardo has been mentioned in our news coverage

Circus to host Fatboy Slim, Solardo and more in Liverpool this October

Fisher to host stage at ABODE in the park

Here are the latest Solardo mixes uploaded to Soundcloud.

Do you promote/manage Solardo? Login to our free Promotion Centre to update these details.