Warning: Use of undefined constant USER_ID - assumed 'USER_ID' (this will throw an Error in a future version of PHP) in /home/vhosts/skiddle.com/httpdocs/artists/artistheader.php on line 29
 Zemel Choir tickets and 2020 tour dates
» Events » Events by artist » Zemel Choir 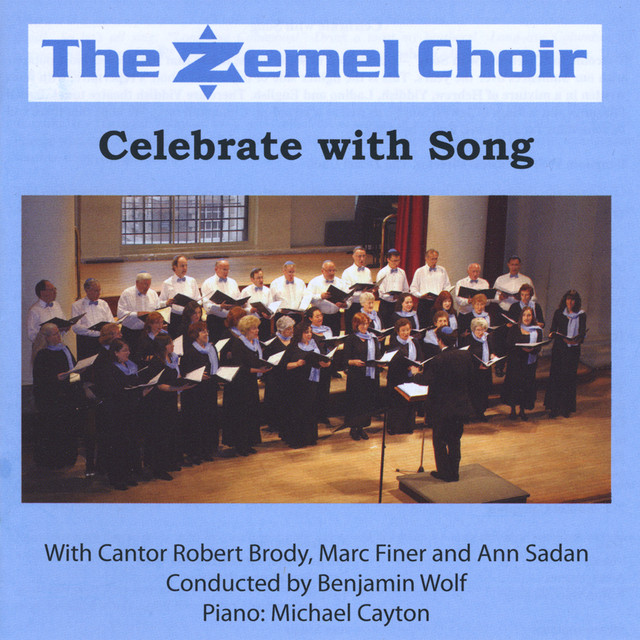 The Zemel Choir, established by Dudley Cohen in 1955, is proud of its international reputation as one of the world's finest mixed-voice Jewish choirs. Our wide-ranging repertoire embraces all the traditional Jewish cultures, Ashkenazi, Sephardi, Yiddish and Israeli. We regularly perform in major venues throughout the U.K. and overseas, and, besides singing well-known favourites, are particularly proud to present new music, often specially commissioned, from contemporary composers. Recent highlights include two performances at Westminster Abbey: a service to commemorate the liberation of Auschwitz-Birkenau (February 2015) and a ‘Service of Solemn Remembrance and Hope on the 75th Anniversary of Kristallnacht ‘(2013). In 2012 we hosted the first European Jewish Choral Festival, an event which has since taken place in Vienna and Rome, and which will be again hosted by the Zemel Choir in 2015. Our Celebrate with Song event, which aims to raise the profile of Jewish choral music through workshops and performances, is now in its eighth year. Its most recent installments took place in collaboration with the London Jewish Cultural Centre and West London Synagogue (2013) and London’s new Jewish cultural hub, JW3 (February 2015). In recent years we have also performed at London venues including the South Bank Centre and V&A museum, and have performed twice for the Mayor of London. In 2005 the Choir celebrated its Golden Anniversary with a concert at St John's, Smith Square, while its 60th anniversary event takes place in November 2015. TV and Radio appearances have included the 1986 live television and radio broadcast of Kaddish for Terezin from Canterbury Cathedral, the Expressions of Reconciliation and Hope service in York Minster in 1990, a Holocaust Day commemoration edition of Radio 4's Sunday Worship in January 2001, and, in January 2005, an edition of BBC1's Songs of Praise, The Holocaust Remembered. We have travelled extensively to the U.S.A., Canada, Israel, and Eastern and Western Europe, and in 1993 participated in the Polish Holocaust Memorial ceremonies in Warsaw and Treblinka to commemorate the 50th anniversary of the Warsaw Ghetto Uprising. At the 1996 Zimriyah Choral Festival in Jerusalem we were invited to sing at the opening ceremony concert, which was broadcast live on Israel Radio, and In October 2001 we toured The Czech Republic and Hungary. In April 2007 we toured Belgium, France and Luxembourg, and in March 2009 we made another successful and enjoyable tour of Israel. In November 2008 we held a major concert in London alongside the Polyphonies Hebraiques de Strasbourg, and followed this in 2011 with a visit to Paris and Strasbourg. In December 2011 we performed alongside seven other Jewish choirs at the inaugural Louis Lewandowski Festival in Berlin, and in 2013 made a two-week visit to America and Canada. In May 2014 the choir visited the second European Jewish Choir Festival in Rome and in November 2014 visited the Sacrées Journées de Strasbourg. The choir has made a number of recordings, some of which are available both as CDs and digital downloads. These include a compilation of the music of Louis Lewandowski, an album of music from the English Jewish music tradition, and a selection of some of the lighter items in the choir’s repertoire. Its most recent recording – Zemel Goes Stateside – features music that was performed as part of the choir’s 2013 USA tour. The Choir is committed to educational and charitable activities. It regularly gives concerts in care homes and for established charities, most recently for Tzedek (a charity which is involved in educational projects in Africa) and the Alzheimer’s Society. The choir runs an annual workshop and joint concert with school children from the Goldbeaters and Orion Primary Schools in North West London. Through this work we introduce Jewish music to mixed faith children and their families, which encourages the development and love of music with a religious or spiritual theme in young people. The Choir has maintained its reputation as a result of professional musical direction, and a strong commitment to rehearsals by its members. We come together not only to sing, but to be part of a warm and friendly social group. We are always happy to welcome new members. To find out more about us, visit our website at www.zemelchoir.org or phone our membership secretary, Doreen Havardi on 020-8868 8423 To find out more about us, visit our website at www.zemelchoir.org

Zemel Choir hasn't been mentioned in our news coverage

Here are the latest Zemel Choir mixes uploaded to Soundcloud.

Do you promote/manage Zemel Choir? Login to our free Promotion Centre to update these details.