» News and Features » The Zutons interview: "overwhelmed and emotional at times"

The Zutons interview: "overwhelmed and emotional at times"

Dave McCabe tells us about the Zutons' huge return to the live frame, and plenty more in this fascinating chat with live editor Henry Lewis.

Liverpool indie rockers The Zutons have not long finished their 'Who Killed the Zutons' 15th anniversary tour when we speak to lead singer Dave McCabe, asking what the post tour buzz is like, he responds:

This, we learn, is down to "sleeping on a bus, which is not good" evidently one of the downsides of being well and truly back into touring life with the band he formed around 18 years ago.

In terms of the gigs themselves, it's only positives from McCabe:

"I enjoyed it. It went better than I could have imagined really."

"I didn't expect it to be like that to be honest. It's been like 10 years, has it been 10 years? Probably longer. Since the first album it's been like 15 years, fucking hell. I suppose people who were in school bought tickets, they're old enough now."

Looking back at that era and its clear that those old enough to have consumed early 00s indie were very lucky indeed. Fresh from the transatlantic influence of the Strokes, heaps of indie bands across the UK were given a golden opportunity to seize the moment and with it came the likes of The Zutons, The Libertines, Franz Ferdinand, fellow scousers the Coral and plenty more.

It's almost alien to imagine that scenario nowadays where guitar music was very much the norm and indie bands were able to infiltrate the main stream with seeming ease in comparison to the modern day climate.

In recent weeks Skiddle caught up with singer and bassist of Milburn, and founder of Good Cop Bad Cop Joe Carnall Jr who stated that The Zutons' debut was one of five indie albums that massively influenced him and his friends, McCabe's reply:

"I'd not heard anyone say that, it's normally the Coral" (Carnall Jr did actually mention the Coral too when we spoke to him).

"Actually Ryan out of the Vryll Society and the drummer Ben said he used to listen to you [The Zutons] on the way to school."

Back to the gigs themselves and how much they meant to the Zutons' singer:

"I was overwhelmed, emotional at times. I was quite narky as well cos I wasn't used to sleeping on the bus. The only song we never played was 'Nightmare part II' but we never played that back in the day cos it just doesn't work. It's me mate, I sound like shit."

As well as scouse outfits The Fernweh, Queen Zee and Peach Fuzz, the band were also joined by fast rising, Alan McGee signees The Illicits, who according to McCabe: "had a song that went 'yeaahhhh' [laughs]  that was my favourite one I dunno if they blagged that for the chorus but that's what it sounds like."

"I'm gonna try and finish songs and then we're gonna do something else. I've got a load of songs I want do as the Zutons. I'm not just doing this for a fucking laugh, I don't need the money from touring it's always aimed towards new stuff"

"I did try and get the band back together a couple of times, cos I thought you're never going to get a band like that again. You just don't have that spark."

With McCabe saying he "doesn't need the money" it caused us to wonder about how the conversation came up regarding Amy Winehouse and Mark Ronson delivering their own cover of The Zutons' 'Valerie', a track that doubtless makes McCabe a tidy sum year upon year.

"I think they recorded it first. Cos you can't stop anyone recording something physically , they just called me and said can we release on Mark Ronson's record. I didn't know who Mark Ronson was, I knew who Amy Winehouse was. They nailed it didn't they? It's a compliment if anything. It's free money isn't it."

"I've done a couple of gigs for Mark Ronson too, I think it was after Amy died."

In terms of band relations, it seems as though McCabe actually hugely needs his bandmates to keep up his own positive thoughts, saying that rather than have nervous excitement ahead of the band's rehearsals for the tour, he had "negative nerves" and "was getting told to cheer up."

"You don't know you're being a fucking bastard but you are."

Looking ahead to festival season 2019 and The Zutons make numerous appearances, notably headlining at Lancaster's Highest Point Festival on Saturday 18th May. But what are their best experiences at festivals to date?

"Glastonbury is probably the best, and also Fiji Rock in Japan."

Throughout the conversation McCabe is a man of few words, and we're left to wonder whether that is his general demeanour or the fact he is ill and bed bound that is making it difficult to draw conservation from him. That doesn't mean there isn't a humour there though, and despite the conversation being short and sweet the Zutons man is a pleasure to talk to.

Continuing on with festivals chat, McCabe's wicked sense of humour shines through.

"The V Fest was always good, it was frowned upon by the people round it but I always had a good gig."

At which one? we reply

Back on to Worthy Farm, we talk about the significance of playing Glasto:

"We played five or six times at Glastonbury . It's better playing it, I've been once not playing."

"When you have a good Glastonbury gig it has an effect on all your other gigs. If you can do well there it can be a good platform.

McCabe concludes: "Our first one was 2003. Fucking hell that's years ago."

"It was the John Peel Stage, the new band tent. Noel Gallagher came to watch and said he enjoyed it." And with that our chat concludes.

With his band back up and running Dave McCabe is in a good place, and has the greatest of intentions to produce more new music with the Zutons, and fans of the band have a bright future to look forward to.

It seems as though nobody killed the Zutons but themselves, but now they are well and truly ready to be resurrected.

Here are the next 3 upcoming events At Williamson Park, Lancaster 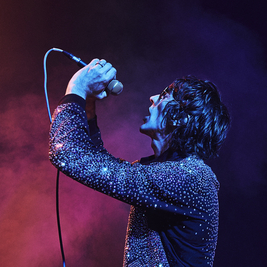